Kalighat Painting: How The Unique Artwork Evolved Over The Years? 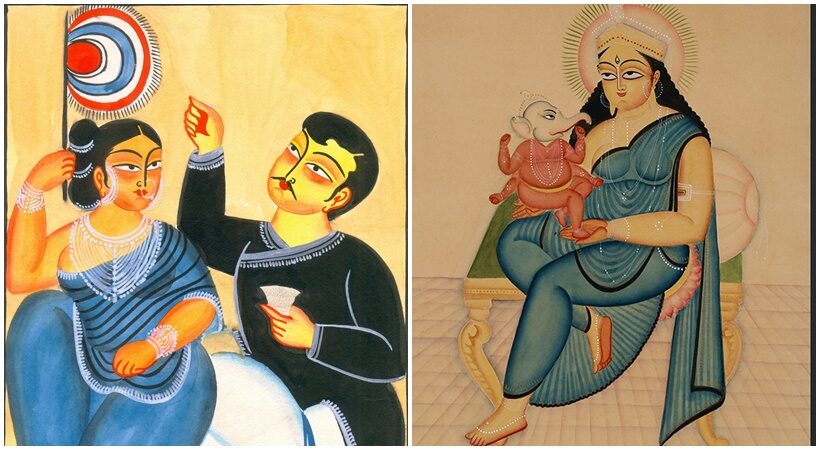 Characterized by bright colours and bold outlines, Kalighat painting evolved as a unique genre of Indian painting in 19th-century Kolkata (formerly Calcutta), in West Bengal. From the depiction of gods and other mythological characters, these paintings developed over time to reflect a variety of themes. Kalighat ‘patuas’ (painters) produced these economical artworks to make a living by selling these in a mass market. As Kolkata developed into a busy and thriving industrial harbour city, migrants poured in looking for new opportunities. Among these were various artisans, craftsmen and painters from various parts of India, including patuas, members of an artisan community from West Bengal.

Kalighat, with its daily hordes of pilgrims, would have provided a perfect opportunity for the local artists to produce and sell small, cheap religious souvenirs. The patuas traditionally painted long narrative stories, often over 20 feet in length. Influenced by the different art forms around them and with a need to work quickly, the patuas abandoned their linear narrative style in favour of single pictures involving one or two figures.

The backgrounds were left plain by removing all non-essential details and basic combinations of colours were used. This created the key characteristics of the Kalighat genre. The patuas’ productivity was also helped by the import of cheaper readymade paints from Britain and mill-made paper.

The paintings can portray several themes such as mythological, natural and still life, historical, daily life and satirical. Some of the eminent artists in this style include Nilmoni Das, Balram Das, Gopal Das, Batkrishna Das and Kalicharan Ghosh.

One of the greatest achievements of the Kalighat artisans was that they made simple paintings and drawings, which could easily be reproduced by lithography. Such lithographs were then hand-coloured and circulated amongst a wider population. This trend continued up to the early part of the twentieth century and these paintings ended up in museums and private collections. The charm of the Kalighat paintings lies in the fact that they captured the essence of daily life and influenced many modern artists.