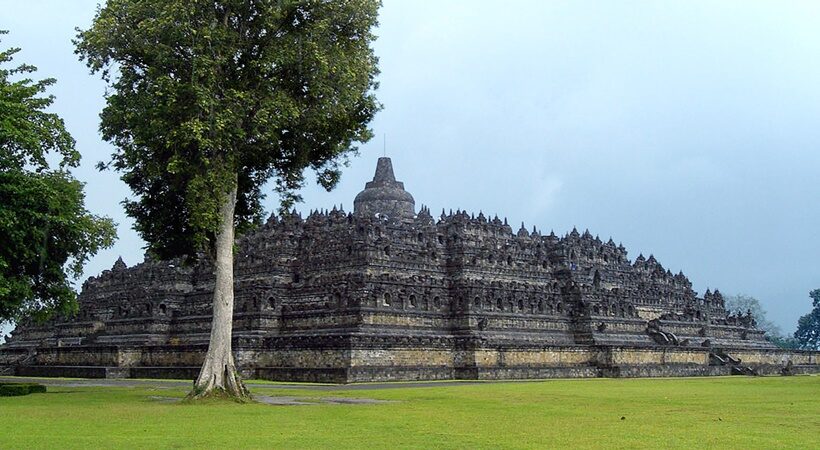 The largest Buddhist temple in the world, Borobudur is considered to be a fine example of Javanese Buddhist architecture. The monument is located in the Kedu Valley, in the southern part of Central Java, at the centre of the island of Java, Indonesia. Constructed during the 8th and 9th centuries under the reign of the Sailendra Dynasty, it was built in three tiers: a pyramidal base with five concentric square terraces, the trunk of a cone with three circular platforms and a monumental stupa at the top.

The walls and balustrades are decorated with fine low reliefs, covering a total surface area of 2,500 m2. Around the circular platforms are 72 openwork stupas, each containing a statue of the Buddha. The temple compound was recognized by UNESCO as a World Heritage Site. The monument was restored with UNESCO’s help in the 1970s.

The vertical division of the Borobudur Temple into base, body, and superstructure perfectly accords with the conception of the Universe in Buddhist cosmology. It is believed that the universe is divided into three superimposing spheres, kamadhatu, rupadhatu, and arupadhatu, representing respectively the sphere of desires where we are bound to our desires, the sphere of forms where we abandon our desires but are still bound to name and form, and the sphere of formlessness where there is no longer either name or form.

At Borobudur Temple, the kamadhatu is represented by the base, the rupadhatu by the five square terraces, and the arupadhatu by the three circular platforms as well as the big stupa. The whole structure shows a unique blending of the very central ideas of ancestor worship, related to the idea of a terraced mountain, combined with the Buddhist concept of attaining Nirvana.

The Temple should also be seen as an outstanding dynastic monument of the Syailendra Dynasty that ruled Java for around five centuries until the 10th century. The Borobudur Temple Compounds consists of three monuments: namely the Borobudur Temple and two smaller temples situated to the east on a straight axis to Borobudur. The two temples are Mendut Temple, whose depiction of Buddha is represented by a formidable monolith accompanied by two Bodhisattvas, and Pawon Temple, a smaller temple whose inner space does not reveal which deity might have been the object of worship. Those three monuments represent phases in the attainment of Nirvana. One of the great archaeological sites of South East Asia, Borobudur is Indonesia’s single most visited tourist attraction.