India And UAE Sign Memorandum Of Understanding On Climate Action 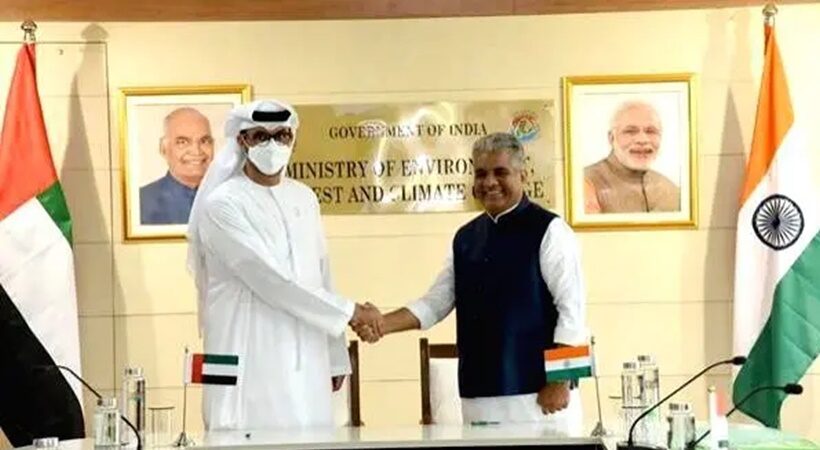 India and the United Arab Emirates (UAE) on Thursday signed a Memorandum of Understanding (MoU) on Climate Action to establish a framework to promote and improve bilateral climate cooperation and contribute to the implementation of the Paris Agreement 2015.

The Paris Agreement was reached in 2015 at the end of the annual climate change conference to coordinate worldwide efforts to reduce carbon emissions and limit global temperature rise to 1.5 degrees Celsius over pre-industrial levels.

Earlier, the two presidents met in a bilateral discussion to address climate change, the hosting of COP28, and other relevant subjects. Yadav spoke on the UAE’s proposal to host COP28 in 2023, saying that poor nations’ concerns, particularly in areas of implementation, assistance, funding, and technology, must be highlighted.

According to the Environment Minister, climate financing, adaptation, and loss and damage require greater attention on the road beyond COP26. Yadav praised and praised the UAE’s climate initiatives, and he also discussed India’s concrete climate initiatives. He also asked the UAE to join the Coalition for Disaster Resilient Infrastructure (CDRI) and the Leadership Group for Industry Transition (LGIT) (LeadIT).

Both nations also agreed that by signing the MoU on climate action, they would be able to explore ways to deepen bilateral climate cooperation, particularly in the areas and activities listed in the MoU.