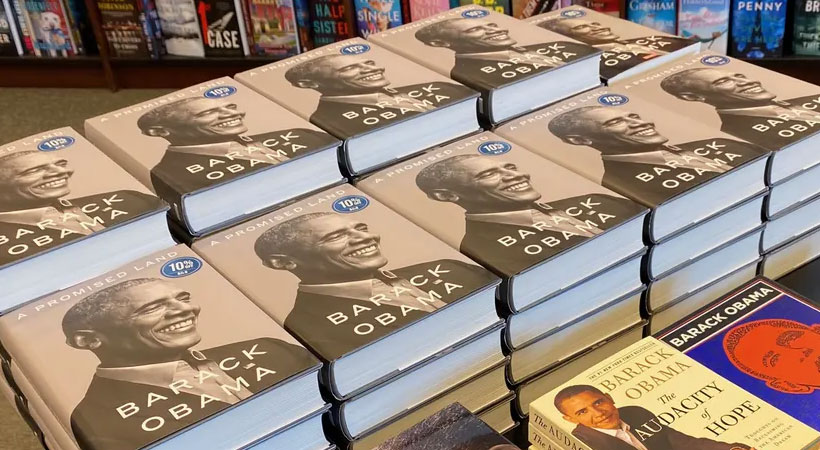 For history, Barack Obama is a pleasant and nostalgic episode between the harsh, parochial Bush era and the displeasing, immature Trump presidency. As the U.S crumbles under the wrath of a pandemic and pandemonium incited by Trump and his fans over the election results, the memoir of the first African American who ascended the Oval office in 2008 can’t be more well-timed.

However, Obama’s inauguration in 2009 wasn’t a calm and tranquil period either. He assumed office when the U.S economy was facing the tumultuous after-effects of the financial crisis along with unabating wars in West Asia and other internal skirmishes. A Promised Land published by Crown is the presidential memoir of Obama’s first term in office.

Even though he painfully admits his lack of brevity, this well written, vivid memoir once again proves his literary prowess and mastery over words which was evident in his last two books. Like a literary connoisseur, Obama knits the personal and political, often evoking a sense of emotions and nostalgia. He describes his personal moments beautifully with humbleness and openness. The journey of an African American to the Presidentship is not a tale sans struggles. With the tensions of personal and professional life, Obama exhibits a mature demeanour with an audacity of hope. Regarding the time at his office and interactions at the global level, he is the man at the middle ground. Rather than donning a messianic role, Obama remains as a detached observer admitting his flaws and reflective about his actions.

From a youthful sceptic who despised politics and politicians as ‘actors in a rigged game’, Obama’s journey to a popular and diplomatic statesman was eventful and inspiring.

He recollects his campaign period as a stage when his persona, with all his shortcomings, transformed into a ‘vessel for a million of dreams’ and admits his anticipation of a period when he would disappoint them. When the free-market policies were blamed for the economic crisis, he entrusted the Clinton-era free-market economists over their ‘experience over fresh talent’ to drive out of the financial crisis. Witnessing Hillary Clinton’s ‘intelligence, preparation and work ethic’, Obama made her the Secretary of State. He also retained President Bush’s secretary of defence Robert Gates, ’a Cold War hawk’ and ‘prior champion of foreign interventions’ whose war policies he abhorred during his college days, to generate trust within the military as well as to fulfil his campaign promise. Obama is a pragmatic politician with manoeuvrable diplomacy.

In his poem ‘As I Grew Older’, Langston Hughes talks about the wall that separated the Blacks and their dreams. As an African American, Obama was aware of such hardships. So for the question “Why do you need to be president?” he responds nonchalantly to Michelle; “I know that kids all around this country—Black kids, Hispanic kids, kids who don’t fit in—they’ll see themselves differently, too, their horizons lifted, their possibilities expanded. And that alone…that would be worth it.” Obama held the hope that his presidency would demolish the walls of segregation and offer the Blacks and Hispanic new dreams. He displays his self-awareness to evaluate his actions without succumbing to the inflated glory held by his cheerleaders. His prose turns poetic and beautiful while narrating the personal anecdotes with family and world leaders. As a master storyteller, he describes his encounters with world leaders and the moments with Michelle and his daughters. Descriptions of his time with Michelle, their thoughts, fights, and support show the President’s life as a family man. However, he also writes about his ‘gangster’ like ‘party crashing’ diplomatic engagement with the BRICS leaders at the UN Climate Change Conference in an intriguing tone.  This memoir is an objective observer’s account of the Obama presidency. With a fair exposition of events during his first term at the office, Obama recollects, reflects and judges his actions. Even though he misses out on significant politics and allots little words for specific policies, A Promised Land as a political memoir has its significance. The tale of a man who rallied with the catchwords of ‘hope’ and ‘change’ and later turning to be a saint of status quo isn’t less significant with Obama and what he has done in American history.