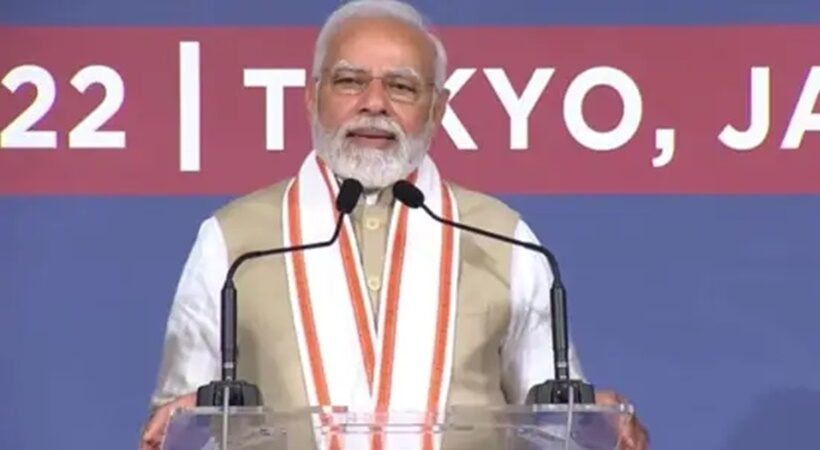 Prime Minister Narendra Modi on Monday addressed and interacted with over 700 members of the Indian diaspora in Japan.

“PM Narendra Modi interacted with members of the Indian community in Tokyo. The 40,000 strong Indian diaspora in Japan is a crucial pillar of the vibrant India-Japan partnership,” said a statement issued by Arindam Bagchi, the Ministry of External Affairs Spokesperson.

In his address, PM Modi said, “India and Japan are natural partners. Japan has played an important role in India’s growth and development. Our relationship with Japan is of intimacy, spirituality, cooperation and belonging.”

PM Modi has also stressed Japan was an essential partner in India’s infrastructure and capacity building while speaking to the Indian community in Tokyo.

Prime Minister remembered Swami Vivekanand’s affection for Japan and urged Japanese youth to visit India at least once, noting that India is as hopeful about the technology-led and talent-led future as it is proud of its past successes.

What do Indian-origin people expect from PM Modi’s visit to Japan?

The Indian diaspora was ecstatic about the event, and cries of ‘Modi Modi and Jai Shree Ram’ resonated around the hall as he began his address.

“When I visit Japan, the people show me tremendous affection. Some of you have lived in Japan for many years and have assimilated its culture. Nonetheless, the commitment to Indian culture and language is expanding, “he noted.

The Prime Minister commended the Indian diaspora for their contributions to Japan while acknowledging their affection for India. “We Indians have a strong attachment to our’ karmbhoomi,’ but our love for our ‘matribhoomi’ never fades. We are unable to remain away from our motherland. This is one of our greatest assets,” Modi said.

He said that a people-led government is now operating in India. “This governance approach makes delivery more efficient. This is the most important cause for people’s rising trust in democracy. Today, India is as proud of its history as it is optimistic about a future driven by technology, science, innovation, and talent,” he added.

In a bilateral meeting, Modi will also meet with Japanese Prime Minister Fumio Kishida. Modi had a round-table discussion in Tokyo with senior executives and CEOs from over 34 Japanese firms, inviting them to participate in India’s “Make in India for the World” initiative.

The Prime Minister will attend the second Quad Leaders’ Summit on Tuesday, which will allow the leaders of the four Quad countries – Japan, Australia, India, and the United States – to assess the success of the grouping’s efforts.