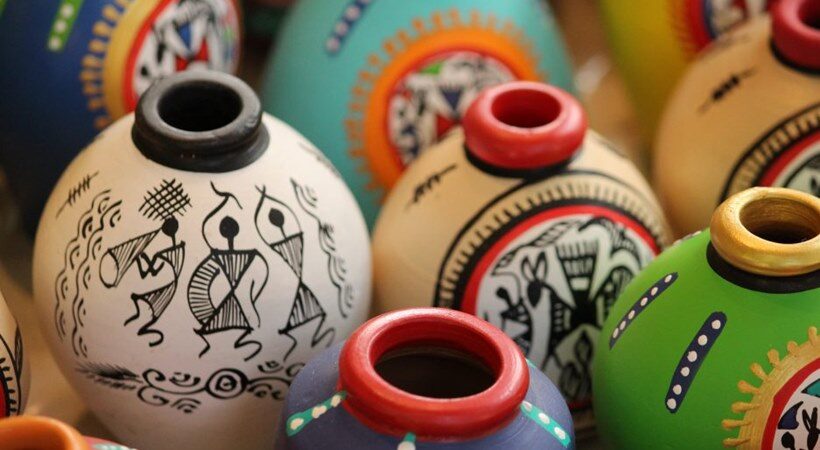 India is home to several folk arts and one of the most prominent amongst them is the vibrant ‘Pattachitra’ from the state of Odisha. With origins in the 12th century and inspired from temple murals, this art form has come a long way as the painting done on paper has moved on to other spheres such as silk, accessories, wall hangings, and showpieces. It is one of the rare art forms which has evolved a great deal in contemporary times but maintained its traditional essence.

In Pattachitra “patta” means canvas and “chitra” picture, as it is a painting done on ‘patta’-cloth/canvas with natural colours. The patta used by the chitrakars (painters) is made by coating the cloth with a mixture of chalk and gum which are made out of tamarind seeds. To obtain the natural colours with the tone, the artists employ different methods and materials.

Gum of the Kaitha tree is used as a base and powdered conch shells are mixed with this base to make the white colour. Lamp soot is used for black pigment, Haritala – a kind of stone – for yellow, indigo for blue, and leaves for green. Pattachitra art is said to last for 100 years because of these traditional practices. The main subjects of the paintings for long have been Hindu deities, folklore, and mythology, but in recent years there were new developments in terms of the subjects depicted as the art form assumed popularity. It is characterized by bold, angular, and sharp lines, and colourful patterns, striking shapes, embossed inside a decorative border. It also has classical and Mughal influences in the designs and patterns and paved the way for the evolution of the Puri school of painting.

The chitrakars, who create these alluring paintings hail from small villages. The entire household is involved in the craft, from preparing the canvas, making colours to designing, the whole house can be called the studio. It may take months to complete one painting and it is the combined efforts of all the family members that give life to the intricate designs. Don’t forget to buy a painting and support local artists the next time you visit Odisha.