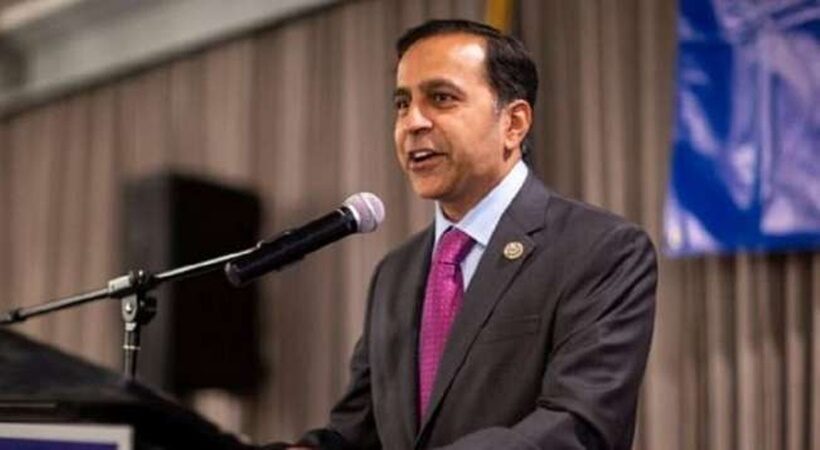 Raja Krishnamoorthi, a US Congressman of Indian descent, has received the Distinguished Leadership Award for his distinguished career and commitment to public service.

The honour was awarded by Illinois Secretary of State Jesse White to the 48-year-old Democratic politician, who has served as the US Representative for Illinois’s 8th congressional district since 2017.

“I present you with the one-of-a-kind personalized license plate: ‘RAJA’ in recognition of your exceptional career and devotion to public service.”

“I hope it serves as a constant reminder of our appreciation for your outstanding service to our state and our country.” “Congratulations on getting the Distinguished Leadership Honor,” White stated in a citation to Krishnamoorthi when he presented him with the award last week.

The Congressman said it was an “honour” to receive a leadership award from a guy of Secretary White’s integrity and track record.

“It occurs to me that receiving a leadership award from Jesse White is like to Michael Jordan complimenting your jump shooting. Secretary White has been a pioneer regardless of the uniform he’s worn or the job he’s held, never worrying who receives the credit as long as a positive effect is achieved,” Krishnamoorthi added.

“We’ve seen it during his career as Illinois’ most successful and longest-serving Secretary of State, in the General Assembly, and in numerous other endeavours, particularly as a mentor and coach,” he added.

According to the Congressman, the Jesse White Tumbling Team, which retains his name and represents so much of his spirit, has helped alter the lives of more than 18,000 young people since its founding in 1959.

“I’m thankful for this honour and for Secretary White’s inspiration, which he has offered and continues to provide for everyone who is dedicated to public service,” Krishnamoorthi remarked.

Krishnamoorthi’s devotion to public service for more than two decades, according to the citation, is commendable.

“Throughout your life, you have committed yourself to help Illinois in numerous positions. As a special assistant attorney general, a member of the Illinois Housing Development Authority, and a deputy state treasurer, you’ve worked for the Attorney General’s office. You have influenced education, job training, workforce development, and public health efforts as a member of the US House of Representatives. The citation states, “You have been a proponent of good administration, the need to strengthen national security, and the need of extending international connections.”

Krishnamoorthi was born in New Delhi to a Tamil-speaking household. When he was three months old, his family relocated to the United States.

“Your personal experience has served as an inspiration to many in Illinois and around the country. Your family came from India to Buffalo, New York, to pursue their aspirations and give you a diverse range of chances. You earned your high school education and graduated as valedictorian from Peoria Richwoods High School in Peoria, Illinois. Your academic journey led you to Princeton University and Harvard Law School, where you earned honours degrees. “Your outstanding work ethic and accomplishments prepared you to achieve great things as a member of Congress,” White said in his commendation.