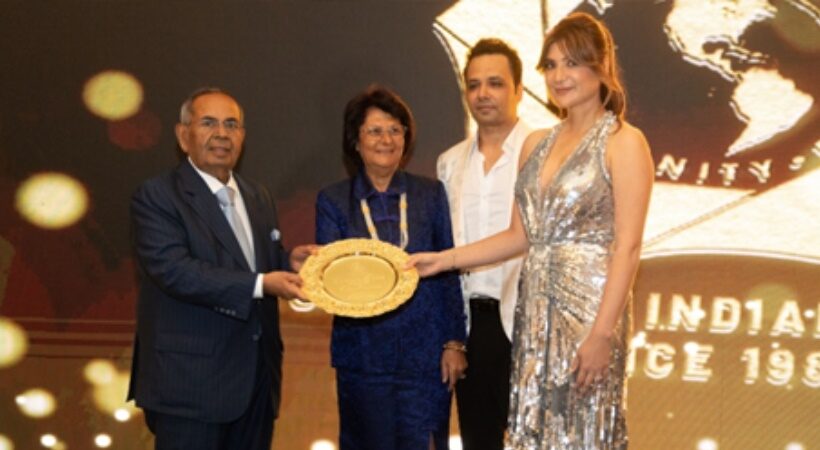 Michelle Poonawalla, a well-known artist, entrepreneur and philanthropist from the illustrious Poonawalla family received the coveted Shiromani Award for her contributions to the arts from G. P. Hinduja, the co-chairman of the Hinduja Group, at the NRI World Summit 2022 in the United Kingdom, as per a news report in The Week. She was also a speaker at the esteemed House of Lords in the United Kingdom.

Keynote speaker Michelle Poonawalla received the Shiromani Award for her contributions to the realm of art while speaking in the House of Lords. On June 23, Poonawalla debuted “Reserve,” her latest piece of art, at the JMS Foundation Charity Gala. Her video “Reserve” emphasized pollution and degradation of water reserves and emphasized water shortage as a worldwide concern.

Poonawalla frequently addresses topics that are universal to audiences everywhere, whether they are in India or the UK. Water shortage is one of the biggest global hazards to date, according to the World Page 1 of 3 Economics Forum, and it has the potential to be devastating for everyone.

Even though everyone suffers when there is water scarcity, relatively few people alter their lifestyles. With the use of eerie imagery of dripping faucets and leaky pipes, the film “Reserve” brought these concerns to light.

As we watch pictures of acrylic paints dissolving in water, a lyrical allusion to the pollution and poisoning that threatens so many of our water reserves, the movie is both poetic and horrifying. Reserve seeks to raise awareness and demonstrate how easy it would be for each of us to change and move toward protecting the most valuable resource on the planet. In his statement to the House of Lords, Poonawalla discussed the power of art to unite people and bring about social change.

“I am conscious of how art has the potential to motivate others into action. I have frequently included environmental subject matter in my work and have previously been affiliated with non-profit environmental groups such as WWF Tiger Trail Elephant Parade and Make Art For Mumbai’s Mangroves. I’m hoping that my movie Reserve will raise awareness of the water shortage problem across the globe. Michelle Poonawalla said, “I am also extremely honoured and humbled to have received the renowned Shiromani Award and to have had the chance to address the House of Lords.”