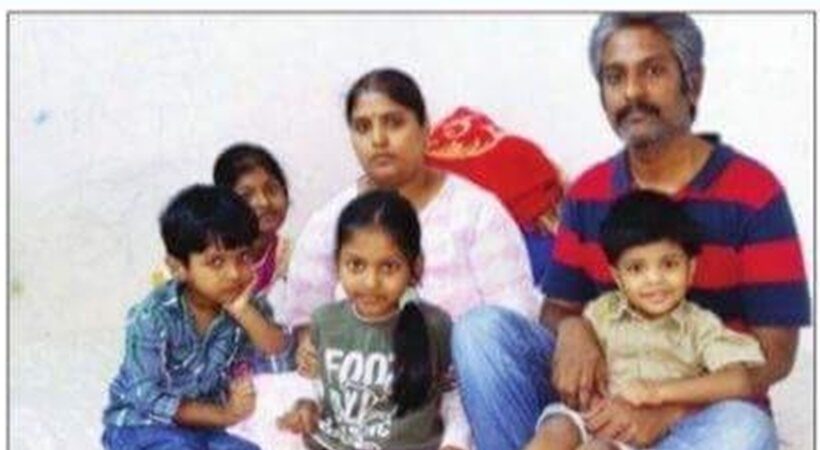 A Tamil couple, Kavitha and Karthikeyan, and their four children returned home on Monday after a 13-year-long struggle for survival abroad. Kavitha told NRI Vision that mortgaging huge loans from various banks to start a business in Dubai following wrong guidance had plunged her family into unexpected hardships.

We have heard many heart-touching stories of Indians stuck in other countries who cannot return home due to cases. Even some popular movies followed a similar plotline. The ‘happy climax’ to such a story has just happened in the life of the Kavitha-Kartikeyan couple. On Monday, they reached Bangalore with the help of UAE immigration authorities, who waived the massive fine for illegal stay. Jain Seva Mission, a prominent Gujarati organisation in Dubai, the support of the Indian Consulate, the legal assistance of Alketbi Advocates in Dubai and various other NRI groups – all played their part in the mission.

In 2002, Karthikeyan Subramanian, a native of Mazhumalaipetta, Coimbatore, married Kavitha Rajamanikyam, who was born and brought up in Bangalore. They came to Dubai in 2005 in search of a job. Although Karthikeyan could not find a job that suits his qualification and expectation, the couple’s expatriate life was sustained by Kavitha’s earnings, as she landed a job first at a contract staffing company and then getting employed at the National Bonds Corporation.

Meanwhile, a friend from Tamil Nadu and Karthikeyan were planning to start a business in partnership. Working as a PRO, this friend was supposed to sort out the necessary documents and permits to get the business running. Using Kavitha’s salary certificate, the couple took a loan of 4 lakh dirhams from eleven various banks. However, the couple said they fell into the debt trap when their friend stepped back from obtaining a business permit after embezzling Dh300,000.

But, banks filed cases against Kavitha after failing to repay the loan. The sufferings of Karthikeyan, Kavitha and the children began as Kavitha lost her job following this. In 2009, the police arrested the couple who were about to return home after repaying 2 lakh dirhams to the bank with the help of friends and relatives. After some time in jail, they were granted bail, but the police seized their passports.

The family went through great hardships in the following years with no income, house, food, or way to return home. In addition, colossal debt hung like a sword hanging overhead. They had to spend the night in the parks and the mosque yards since they had no place to stay. Later, the family of six stayed in a single-room apartment near the Etisalat metro station. Neighbours and some expatriate Indians also helped them by providing food and essentials at times.

The experiences that Kavitha and Karthikeyan’s children had to face at an early age are disheartening. The parents got involved in the case when their eldest daughter Ishita was two years old. Soon after the birth of her second daughter Shriya, Kavitha became accused in the case. Karthikeyan, who sponsored Kavitha’s visa, was also stuck in Dubai. In 2011 and 2012, two more boys, Kalesh and Namit, were born to the couple. These four children have not been able to go to school.

The two youngest babies were delivered at home as they did not have money to pay for hospital expenses. So, both of them have no birth records. They have not been able to get any vaccinations or health screenings mandatory for children of the age group. During this period, malnutrition and diseases plagued the mother and the children. Medical treatment was also beyond their access due to the lack of documents and money.

As misunderstandings related to the case surmounted, relatives back home also distanced themselves from the couple by the time. This closed the door on the distant possibility to send the children back home to their relatives. In a 2015 television interview, Kavitha said that some people even approached her with a piece of advice to give the children for adoption to some wealthy couple who are in need. But she did not want to give up.

In 2015, many media reports highlighted the family’s plight, following which many non-resident Indians extended help for the settlement of the case, the family’s livelihood and the education of the children. Along with this, the Indian Embassy also came with a helping hand. At that time, the embassy officials offered help to bring them home if they settle other obligations. While all other cases were settled with the help of various organisations, one case was still pending. That case was not updated in the system at the time due to a technical error. Following this, some other cases had also registered. This delayed their return to the homeland for another seven years despite obtaining an outpass in 2015, explained Kavitha.

So the long wait to return continued for another seven years. Kavitha and Karthikeyan’s only resource for survival was the fortitude to persevere even at the peak of suffering and keep striving without giving up hope. Now, they hope that they would be able to put aside the bitter experience of exile and build a new life.

(With inputs from Ameer Moideen from Dubai)