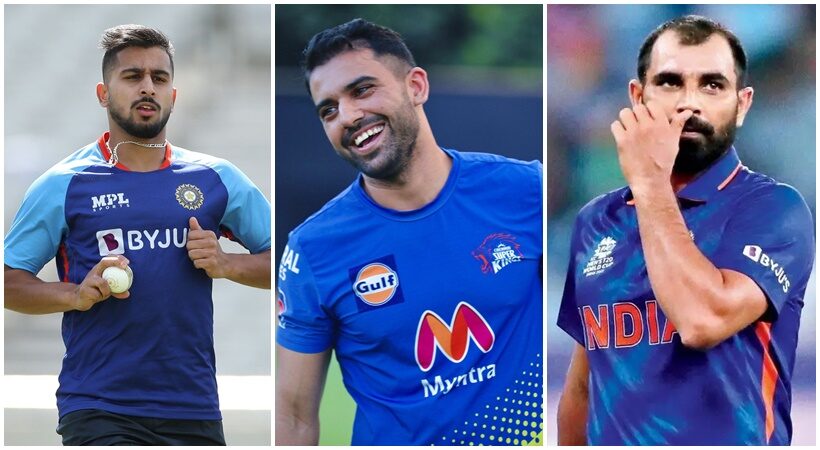 In a mighty blow to the prospects of India in the T-20 World Cup, the country’s pace spearhead Jasprit Bumrah has been ruled out for the marquee event in Australia. This is certain to upset the balance of the team composition and will render India’s bowling attack toothless on the bouncy Australian tracks. With the majority of the bowlers in the category of gentle medium pacers India badly needed a couple of bowlers who could clock in 140 kmph regularly. So, now, the million-dollar question is, who will replace Bumrah in the coveted event?

The pacer from Amroha (UP) may no longer be an automatic choice in the Indian lineup for the shortest format, he has the pace and bounce to rattle the rival batters on the hard and bouncy wickets down under. Mohammed Shami might have had a strictly mediocre T-20 World Cup campaign in the UAE last year but the pacer has the experience and capability to excel in Australia. Also, looking at his IPL performance for Gujarat Titans this year, 16 wickets in 20 matches, Shami can easily be drafted into the main squad from the list of reserves without any hesitation.

In the absence of Ravindra Jadeja, Team India is sorely missing an allrounder who could bat down the over and roll his arm over to complete the quota of allotted overs for bowlers in the T-20 format. Yes, there is Axar Patel but he is yet to prove himself and is a spinner as well. As was evident against South Africa in the Thiruvananthapuram T-20 encounter, Deepak Chahar can capitalise on the swing and movement early on and pick quick wickets at the start. However, the lingering issues are that he brings the same set of values as Bhuvaneshwar Kumar and does not have the pace to rattle the batters. And these are slightly bigger issues concerning Chahar, who is part of the world cup squad as a standby.

The fiery pacer from Jammu and Kashmir had been constantly in news, not too long ago, for hurling 150 plus deliveries in quick succession in the IPL. He even earned a call-up to the senior men’s squad in the Ireland tour for his ability to bowl thundering bolts at regular intervals. But his frailties due to lack of experience were clearly evident in the series and Malik got discarded immediately from the Indian team. In reality, Umran Malik looks like a dicey candidate in an important tournament like the world cup, but India need, at least, a couple of tearaway pacers and he fits the bill perfectly. However, one question remains, whether the youngster with an economy rate of over 12 in three T-20 fixtures is worth taking a risk for an event of this magnitude?